The vaccine – called ChAdOx1 nCoV-19 – uses a harmless, weakened version of a common virus that causes colds in chimpanzees

How does the AstraZeneca/Oxford vaccine work?

The vaccine – called ChAdOx1 nCoV-19 – uses a harmless, weakened version of a common virus that causes colds in chimpanzees.

Researchers have already used this technology to produce vaccines against a number of pathogens including flu, Zika and Middle East Respiratory Syndrome (Mers). The virus is genetically modified so it is impossible for it to grow in humans.

Scientists have transferred the genetic instructions for coronavirus’s specific “spike protein” – which it needs to invade cells – to the vaccine.

When the vaccine enters cells inside the body, it uses this genetic code to produce the surface spike protein of the coronavirus. This induces an immune response, priming the immune system to attack coronavirus if it infects the body.

How does the Oxford vaccine work? 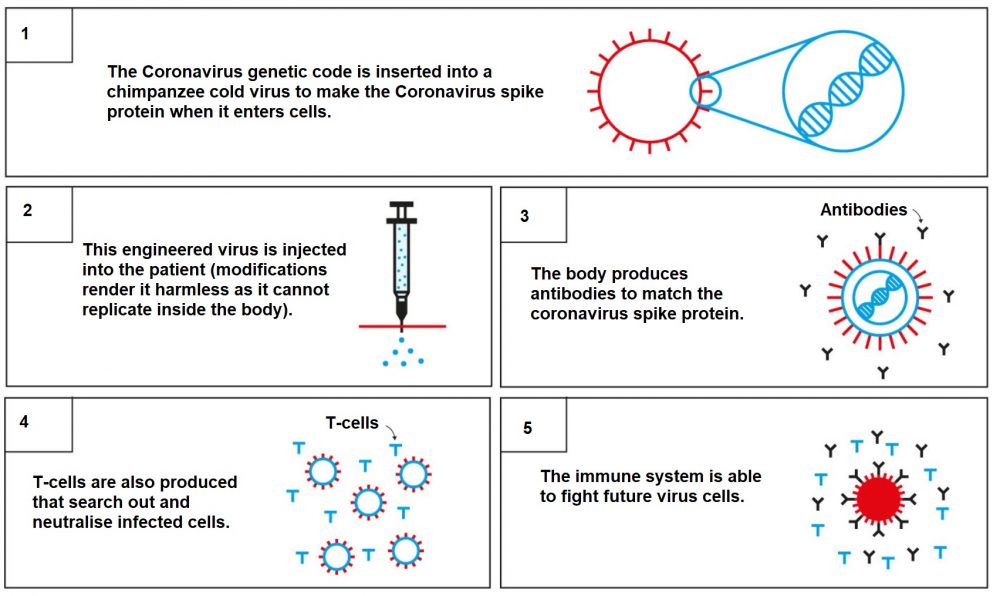 How effective is it?

Oxford University and AstraZeneca – a British-Swedish multinational pharmaceutical and biopharmaceutical company with its headquarters in Cambridge – announced that their jab was effective in preventing many people getting ill and it has been shown to work in different age groups, including the elderly.

Partial immunity against Sars-Cov-2 is then detected approximately 22 days after administration of the first dose, the MHRA reported.

Data published in The Lancet in early December showed the vaccine was 62 per cent effective in preventing Covid-19 among a group of 4,440 people given two standard doses of the vaccine, when compared with 4,455 people given a placebo drug. The overall Lancet data, which was peer-reviewed, set out full results from clinical trials of more than 20,000 people.

Among the people given the placebo drug, 10 were admitted to hospital with coronavirus, including two with severe Covid-19 which resulted in one death. However, among those receiving the vaccine, there were no hospital admissions or severe cases. The combined analysis from both dosing regimens resulted in an average efficacy of 70.4 per cent

According to new results, a single dose of the Oxford-AstraZeneca vaccine prevents two-thirds of Covid transmissions, raising hopes for the easing of restrictions by Easter.

The data, released on Feb 2, found a single dose was 76 per cent effective in fending off infection between 22 days and 90 days post-injection, rising to 82.4 per cent after a second dose at that stage.

In a major vindication of government policy, the study also found that the vaccine is more effective overall if the second dose is delayed from 28 days until 90 days.

This has been further backed up by new evidence published on March 1. A new study from Public Health England (PHE) suggests that a single dose of the Pfizer or Oxford vaccine offers dramatic protection against hospital admission and severe disease in older people.

The PHE data, from more than seven million people, found that either jab cuts the risk of hospitalisation among over 80s by more than 80 per cent while reducing infections in such age groups by around two-thirds.

The AstraZeneca jab slightly outperformed Pfizer with the Health Secretary saying that the findings from 7.5 million people aged 70 and over showed the vaccination programme is saving lives, and may explain dramatically reduced pressures on hospitals.

Is it effective against the new variants?

Data on the highly contagious Covid-19 variant identified in England do not suggest that the AstraZeneca / Oxford vaccines will be less effective against it.

“We have the most data on the UK variant. That doesn’t suggest that it will be any less well protected against by the vaccine,” said Wei Shen Lim, chair of Covid-19 Immunisation on Britain’s Joint Committee on Vaccination and Immunisation, on Jan 13.

The Oxford University researchers who developed the jab say it has a similar efficacy against the variant compared to the original Covid-19 strain it was tested against.

But research has revealed that the Oxford vaccine “provides minimal protection” against mild disease caused by the variant of Covid-19 first discovered in South Africa, according to early data from a small trial.

A study suggested the Oxford vaccine was only 10 per cent effective against the variant.

The study, from South Africa’s University of the Witwatersrand and Oxford University, analysed the E484K mutation in some 2,000 people, most of whom were young and healthy.

The team found that the vaccine had “substantially reduced” efficacy against the South African variant compared to the original strain of Sars-Cov-2.

Professor Salim Abdool Karim, leader of South Africa’s Covid response, said: “We don’t want to end up with a situation where we vaccinate a million people or two million people with a vaccine that may not be effective at preventing hospitalisation and severe disease.”

However, scientists advising the World Health Organization warned against jumping to conclusions and awarded emergency-use licenses to two versions of the Oxford-AstraZeneca jab on Monday 15 February.

Sarah Gilbert, professor of vaccinology at the University of Oxford, told the BBC she was confident the vaccine would prevent severe illness.

However, a tweaked Oxford vaccine which can cope with the new coronavirus variants circulating in Britain will be trialled in the coming months before being rolled out in the the autumn, scientists have said. And the World Health Organization looks set to approve the Oxford-AstraZeneca vaccine for use in developing countries.

Moderna and Pfizer-BioNTech both said their vaccines were effective against new variants of the coronavirus discovered in Britain and South Africa, but they are slightly less protective against the variant in South Africa, which may be more adept at dodging antibodies in the bloodstream.

As a precaution, Moderna has begun developing a new form of its vaccine that could be used as a booster shot against the variant in South Africa.

It was also announced on Feb 5 that the UK Government has struck a deal with the German drugs firm CureVac for 50million doses of vaccine designed to beat future variants.

Does it differ to Pfizer and Moderna’s vaccines?

Yes. The jabs from Pfizer and Moderna are messenger RNA (mRNA) vaccines.

Conventional vaccines are produced using weakened forms of the virus, but mRNAs use only the virus’s genetic code.

An mRNA vaccine is injected into the body where it enters cells and tells them to create antigens.

These antigens are recognised by the immune system and prepare it to fight coronavirus.

No virus is needed to create an mRNA vaccine. This means the rate at which the vaccine can be produced is accelerated.

The Pfizer and Moderna vaccines have both been approved in the US.

The UK Government began the roll-out of the Pfizer vaccine on Dec 8.

Unlike the Pfizer vaccine, the Oxford jab does not require ultra-low temperatures.

The Oxford jab requires temperatures between 2C and 8C and can be stored for at least six months.

This is the typical temperature of a domestic refrigerator and this will make deployment of the vaccine much easier and faster.

What about antibodies and T-cells?

The Pfizer, Oxford/AstraZeneca and Moderna vaccines have been shown to provoke both an antibody and T-cell response.

Antibodies are proteins that bind to the body’s foreign invaders and tell the immune system it needs to take action.

T-cells are a type of white blood cell which hunt down infected cells in the body and destroy them.

The Oxford/AstraZeneca vaccine induces robust antibody and T-cell responses across people of all ages, the data indicates.

Can this vaccine help the elderly?

There have been concerns that a Covid-19 vaccine will not work as well on elderly people, much like the annual flu jab.

However, data from the Oxford/AstraZeneca trial suggests there have been “similar” immune responses among younger and older adults.

The results show that the vaccine is better tolerated in older people compared with younger adults, and produces a similar immune response in old and young adults.

Can pregnant women have the vaccine?

Pregnant women and breastfeeding mothers have now been given the green light to take either the Oxford and Pfizer coronavirus vaccines following an appropriate case-by-case risk evaluation with their healthcare practitioner.

This is a reversal of previous advice which was put in place as precautionary measure.

Traditionally pregnant women are not included in clinical trials, but following a review the MHRA are recommending pregnant women be given the opportunity to receive the vaccine as as there is no evidence they would be at risk.

Dr June Raine, chief executive of the MHRA, said: “Our advice to date has been that given that in initial lack of evidence on a precautionary basis, use of a vaccine wasn’t recommended in pregnancy and women with breastfeeding should not be given the vaccine.

“But now that we have reviewed further data that has become available, the Commission on Human medicines has advised that the vaccine can be considered for use in pregnancy when the potential benefits outweigh the risks following an individual discussion with every woman.”

Can people with allergies have the vaccine?

The rollout of the Pfizer vaccine was temporarily halted for those who are known to suffer from severe allergic reactions following a handful of adverse events in the initial distribution of the vaccine.

There were some concerns that this would also apply to the Oxford jab.

However, following a review, the UK regulatory body has recommended both the Pfizer and Oxford vaccine are safe to administer to those with food or medicine allergies.

Only those who have a known history of reacting to vaccines in the past should proceed with caution.

Sir Munir Pirmohamed, clinical pharmacologist and geneticist, and chairman of Commission on Human Medicine Expert Working Group, said. “We’ve come to the recommendation people with a known history of reacting to any specific ingredients of vaccine should not have it. But people with allergies to other medicines or food can have the vaccine.”

Dr June Raine added that “at least 800,000 in the UK, probably a million and a half in the US” have already received the Pfizer vaccine.

There has been “no additional concerns and this gives us further assurance that the risk of anaphylaxis can be managed through standard clinical guidance and an observation period following vaccination of at least 15 minutes.