A growing coronavirus second wave is threatening to overwhelm fragile healthcare systems across Africa after months of relatively mild impact across the continent, AHO has warned.

Authorities in Nigeria, Senegal, Sudan, South Africa and the Democratic Republic of Congo, as well as international organisations, say hospital capacity and oxygen supplies are running out as the continent-wide death rate this month surpassed the global average for the first time.

“It is very severe,” Dr John Nkengasong, head of the AU’s Africa Centres for Disease Control, told reporters last week. He appealed to African leaders to subsidise masks because “for now [they] are the best vaccines that we have”. Dr Chikwe Ihekweazu, head of the Nigeria Centre for Disease Control, warned that doctors would soon face “tough decisions” over whom to treat. “The biggest indicator that will put us under pressure is the number of deaths,” he said last week.

“We must keep working to save as many people as we possibly can given the limitations that are clear in [African] health systems.” In recent weeks, daily case rates across the continent have surged to roughly twice the previous peak in July and August and are likely to rise further as the impact of travel during the December holiday period became clearer, said Dr Nkengasong.

Chart showing the number of new cases of coronavirus in the African Union, South Africa, Egypt, Senegal, NIgeria and Zimbabwe 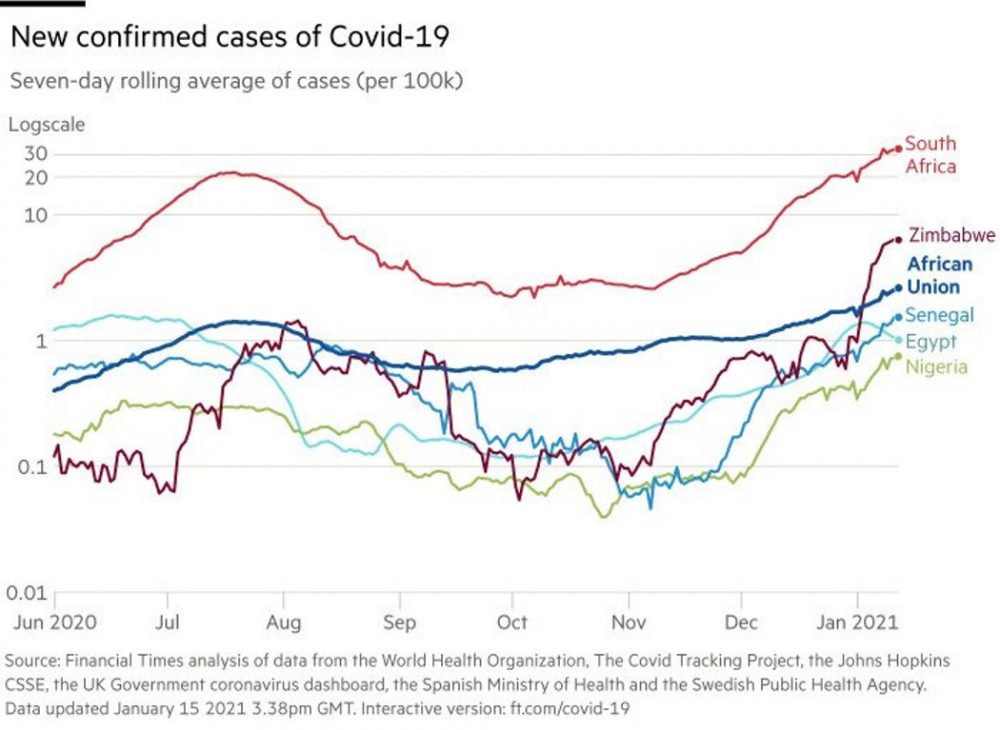 “What is driving it . . . is very clearly human behaviour,” he said, arguing that, after strong compliance with mitigation measures last year, “prevention fatigue” had set in, with people neglecting social distancing practices. The number of cases remains relatively small in most African countries, which have some of the youngest populations in the world. The continent has recorded just over 3.1m infections and roughly 75,000 deaths in a population of 1.3bn, although health officials say that some countries have under-reported.

But the numbers have risen 18 per cent in the past month. Nigeria, Egypt and South Africa experienced an increase of more than 25 per cent over the period. After three months with 100-200 confirmed cases a day, Nigeria recorded more than 1,000 in a single day for the first time last month and on January 6 reported a record 1,664. Of about 1.27m confirmed infections in South Africa so far, around 200,000 have been recorded since the start of 2021.

Death rates in 20 African countries are now higher than the global average of 2.2 per cent, with fatalities rising by more than 30 per cent in the past month in Nigeria, Egypt and South Africa. African countries struggled to source medical equipment in the early months as affluent nations bought up supplies. They have been similarly outgunned on accessing vaccines. A vendor sells face masks in Bamako, Mali. As the pandemic intensifies, African countries are tightening restrictions, with curbs on large gatherings, school closures and mandatory mask wearing

While 600m doses have been targeted for the continent by Covax, the WHO-backed international facility set up to pool orders by poorer nations, countries are still waiting for this supply and lack the financial clout to compete with richer nations in ordering directly from manufacturers. The African Union last week announced it had secured 270m doses for its 54 member countries, which have a population of about 1.2bn.

The vaccines have been ordered from Pfizer, Oxford/AstraZeneca via India’s Serum Institute, and Johnson & Johnson. The AU hopes to begin rolling them out by April. Officials in some countries, including Nigeria, have promised that the first jabs would begin this month. However, only South Africa has struck a deal outside Covax with a manufacturer, for 1.5m doses of the Oxford/AstraZeneca vaccine made by the Serum Institute.

The AU doses are in addition to the Covax programme, which is aimed at helping 92 developing countries access vaccines, though it will only cover about 20 per cent of their populations. The AU aims to vaccinate 60 per cent of its population within two to three years. South African president Cyril Ramaphosa, who is chairing the AU, said last week that until June, Covax supplies “may not extend beyond the needs of frontline healthcare workers, and may thus not be enough to contain the ever-increasing toll of the pandemic in Africa”.

Recommended Coronavirus treatment Covid vaccine tracker: The shots available and the doses administered As the pandemic intensifies, many countries are tightening restrictions, introducing curbs on large gatherings, school closures and mandatory mask wearing. Zimbabwe reimposed a national lockdown this month, while last week South Africa — where a more infectious variant of the virus has driven its spread — closed land borders.

But full lockdowns will be difficult to institute, given the devastating impact of last year’s shutdowns on largely informal economies. The IMF has projected African GDP contracted 3 per cent in 2020. “It’s going to take time for vaccines to reach all the populations,” said Dr Faisal Shuaib, chief executive of Nigeria’s National Primary Health Care Development Agency. “Face masks, social distancing, washing of hands, sanitisers . . . we need to revert to those interventions that will save lives and sustain livelihoods.”