Dimensions of TB epidemic in Zimbabwe

TB is considered one of the leading single agent infectious diseases causing adult death in developing countries ranking above HIV. In developing countries, about nine million people are suffering from TB of which 1.8 million are killed every year as a result. Although considered as an ancient disease, it is one of the three most killers of infectious diseases together with malaria and HIV. African countries have the highest burden of TB population compared to the global average reported to the WHO in 2014.(1)

Although global death rate from the disease has dropped in between years 1991 and 2016 falling at a rate of about 3% per year to reach 1.3 million deaths at 2016 (2), the alarming spread and resurgence of resistance to treatment makes proper diagnostics, care and prevention of transmission options the main areas that need consideration and proper actions.

TB is among the top ten causes of death in Zimbabwae killing 3900 people in 2012.(3)Together with HIV and malaria, TB is responsible for the great majority of deaths in the country in both male and female population. The sum of years of life lost due to premature mortality (YLL) In the Disability-adjusted life years (DALYs) estimate of disease burden in 2012 due to the three diseases (HIV-TB- Malaria) is about 2.5 K (4) which makes the country the 17th highest tuberculosis burden country in the world.

Nature and magnitude of the problem:

It is proposed that the re-surgence and spread of TB is associated with the high prevalence of HIV in some African countries. Zimbabwae is one of the top 8 African countries with the highest burden of TB, TB\HIV and drug resistant TB and that makes TB problem in the country more complicated with multiple interacting dimensions.

Zimbabwe has met its Millennium Development Goal (MDG) target of reducing its TB incidence rates but hasn’t met the targets set for a 50% decline in prevalence rates and mortality rates (5). In 2012, 15 of the 22 high burden countries reached or exceeded the MDG target set for a treatment success rate of 85% among all new cases. Zimbabwe was among the 6 that didn’t meet that target, reporting lower treatment success rates of 81%.(6)

Risk Factors contributing to the problem:

Here we propose several interacting dimensions for TB epidemic in the country which are suggested to be as follows:

Although the incidence of new TB cases in Zimbabwae is generally decreasing over time evident by the rate of (242 per 100000) in 2015 compared to (605 per 100000) in year 2000 (2), there may still be lack of complete accurate information about the actual rate of notification of new TB cases. Although smear microscopy is still considered the standard test used for case diagnosis, it is considered to be accurate only in half of cases. In addition to that, this method is difficult to use with children for technical reasons and cannot be used to diagnose extrapulmonary TB. Another important point is that it is less accurate in HIV patients who are considered a large population in the country with high HIV prevalence where TB is also considered a major cause of death in patients living with HIV in Africa.

Xpert MTB/RIF® has been introduced since 2010 in many countries including Zimbabwae however, its use is not applicable to all settings, nor is effective for diagnosing children or patients with extrapulmonary TB. There are also some disadvantages related to cost of the test, technical requirements for stable electricity supply and instrument recalibration.

2) Problems with HIV in Zimbabwe:

Thirty four (34) million people worldwide live with HIV, the majority of them are in sub-saharan Africa. Affordable rapid diagnostics for HIV are available but majority of HIV patients are usually unaware of their disease status and do not seek medical advice. There are also some gaps in health care services available to HIV patients including routine viral load measurement and availability of second line antiretroviral treatment.

The high percentage of HIV patients in Zimbabwae increases the risk of acquiring TB which further aggravate the problem. It is estimated that 80% of TB patients are co-infected with HIV (7). HIV is a powerful aggravating factor that increases the risk and susceptibility to acquire TB or to the progression of latent TB infection. It is considered the most significant contributing factor to the TB burden in the country where approximately 80 percent of TB patients are co-infected with HIV. This co-infection is considered a main cause for the high death rate among TB patients in Zimbabwe. HIV and TB are interlinked in a cross-interacting way; TB increase the morbidity and mortality in HIV patients and HIV is an aggravating factor for the TB epidemic. Lack of appropriate detection and notification of both diseases add a hidden element that can not be assessed and further complicate the problem. Some research reports showed that being HIV positive is associated with higher mortality rate among patients with TB in the country (8). Other research studies have also showed that the re-emerging TB epidemic reflects socioeconomic crisis and associated high HIV prevalence in the country (9).

Less funds are available to health sector and social services in the country and this can obviously affect availability and access to laboratory diagnostic services which plays a major role in early diagnosis and in limiting the spread of disease. The governmental budget allocated for ministry of health and child care is 337,005,000.00 out of 4,108,226,000.00 total budget during 2014.(10) And out of this total budget for health, medical care services in the form of hospital and health centre services expenditure are only 20,725,000.00. Research programs are allocated only 244,000.00. (10) Regarding TB, domestic funding available for the disease management and prevention is estimated to be less than 1% with about 100% of funding available coming from international sources with total budget of 18 millions USD during 2016. (11)

According to WHO health quality report for sustainable development goals associated with TB incidence, some social factors can be contributing to TB problem including prevalence of undernourishment (about 50% of population during the period between 2000 and 2015), access to clean fuel and cooking technologies estimated to be around 25% of population and percent of urban population living in slums to be around 25%.(12) 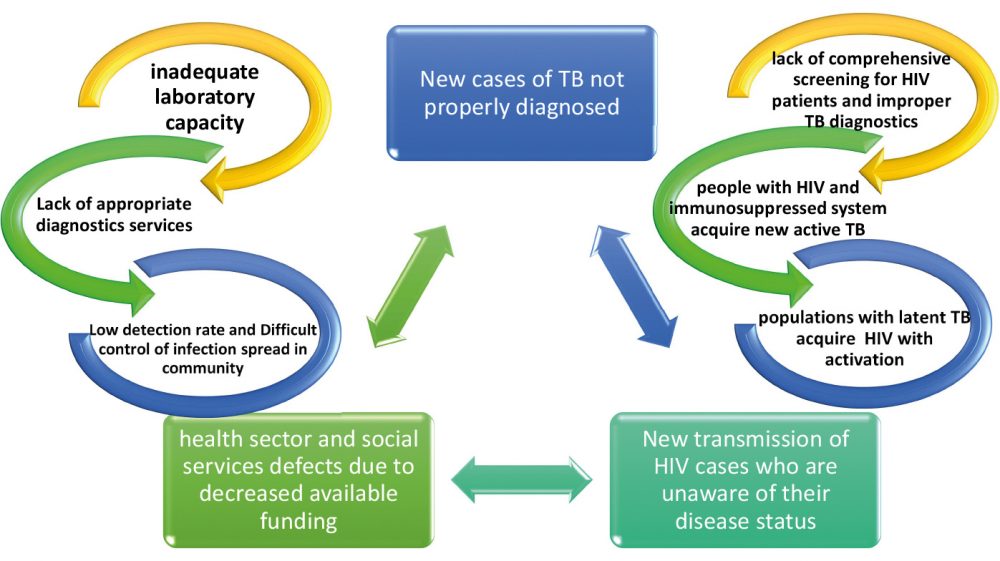 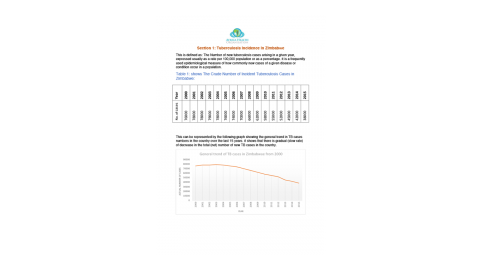