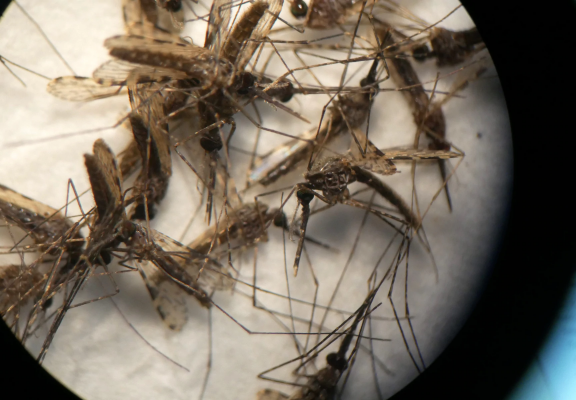 How one African community is fighting genetically modified mosquitoes

At the start of the rainy season earlier this year – when mosquitoes multiply and malaria strikes – scientists, officials and journalists gathered in the small village of Bana, Burkina Faso.

At their feet were cases containing thousands of male mosquitoes, genetically engineered to be sterile and fluorescent – so they can be easily recaptured for further study later. The cases were opened and a second later, the mosquitoes swarmed out.

This was a landmark moment in the long history of malaria control as it was the first ever release of genetically-modified mosquitoes on the African continent. It was also the very first step in a 12-year experiment to reduce the population of one species of the insect that is responsible for most of the 4,000 malaria deaths in Burkina Faso every year.

Researchers from the Target Malaria consortium, a not-for-profit research group funded by the Bill & Melinda Gates Foundation and various research institutions, have developed a mosquito in their laboratory that can kill off its own species by spreading a faulty gene.

If it works in the wild, the technology – called gene drive – could help eliminate malaria where decades of efforts involving bed nets, repellents and insecticides have failed.

This isn’t the first experiment Burkinabes have witnessed in the fight against one of Africa’s leading killers but it is certainly one of the most radical. Since malaria research started in Burkina Faso in the 1940s under French occupation, every major tool to prevent or treat the disease has been tested here.

But the move towards genetic modification has unleashed unprecedented opposition in the landlocked West African country. In the summer of 2018, more than 1,000 people marched in the capital Ouagadougou against the use of genetically-modified organisms in the country, including the GM mosquitoes.

The United Nations considered a ban on gene drive last year but pulled back – instead ruling its use should be limited, to the consternation of both scientists (who support the technology) and conservationists (who don’t).

Environmental groups from around the world warn that removing just one species of mosquito could disrupt the eco-system in unforeseeable ways.

“We refuse to be guinea pigs,” said Ali Tapsoba, who represents the Citizens’ Collective for Agro-ecology, an umbrella group of more than 40 organisations, and one of the organisers of last year’s protest.

Genetic modification is a sensitive topic in Burkina Faso. A nearly decade-long experiment with Monsanto cotton culminated in the government halting the use of the crop after concerns about poor quality and emergence of disease.

Critics say there is not enough proof that the technology works and the risks to health and the environment are too high while safer, cheaper methods such as recently-tested vaccines, and repellents are being pushed aside.

Gene drive – which would be rolled out in Burkina Faso in 2024 at the earliest if approved by national authorities – works by unleashing a mutated gene that spreads rapidly through the species. In this case, the mutated gene would cause Anopheles Gambiae mosquitoes to produce only male offspring, potentially eliminating the species in certain places. Once released, it can’t be stopped.

“In a country as poor as ours we will have gene-drive mosquitoes in the wild in a nearly-irreversible process. If it poses a health risk, what is our capacity to find a solution? Do we have the financial and human resources to deal with it? The answer is no,” Mr Tapsoba said.

His group is preparing a lawsuit against the National Biosafety Agency of Burkina Faso, which approved the July release.

Experiments to control diseases through genetic modification have so far shown poor results. A recent trial in Brazil found that the population of mosquitoes did not fall to low enough levels after the release of hundreds of thousands of sterile insects. And some of the engineered genes had unexpectedly passed on to local mosquitoes.

A plethora of tools are already in use against malaria, from conventional bed nets to preventive treatments to a repellent shea butter cream developed in the country.

The government distributes millions of treated bed nets every year. And for the first time earlier this year, a programme in which health workers give children under five preventive medicine during the rainy season was rolled out across the country.

In the small health centre of Koubri, an hour south of the capital, feverish children wait in their mothers’ arms for a doctor’s appointment while health workers prepare for their second distribution of preventive medicine of the year.

Two-year-old Faical Rouamba has just been diagnosed with malaria. His mother, Alizeta, says she uses a mosquito net at home and Faical had received the preventive medication. She would like to buy repellent sprays or spirals, but cannot afford to. “There are always mosquitoes in the room,” she says, while holding her son.

More than three-quarters of consultations here are malaria related but the numbers are going down. “Usually in this period we’d see between 80 and 120 children a day. But now it’s around 30,” says the head nurse Bajala Eloi.

Such small victories will not eradicate the disease from Burkina Faso. Of all the malaria deaths in the world in 2017, six per cent occurred in this landlocked country of 19 million. It ranks third globally for malaria deaths, behind much bigger, more populous countries like Nigeria and the Democratic Republic of Congo.

And the tools to fight it are fast becoming obsolete. “Every time we find a new tool, the parasite or the mosquitoes find something too,” said Jean-Bosco Ouedraogo, who heads the malaria and tropical diseases unit of the Institute of Research in Health Sciences (IRSS) in Bobo-Dioulasso.

“First, we found that chloroquine could eliminate the parasite in the 1960s. Then the parasite evolved and it stopped working. Then we found insecticide and thought we could kill the mosquitoes. Then mosquitoes evolved and became resistant,” he told the Telegraph .

This year, the government started distributing a new generation of insecticide-treated mosquito nets to counter resistance.

And while multi-drug resistant malaria parasites spreading in Southeast Asia have not yet reached sub-Saharan Africa, studies show a drop in effectiveness in some of the most common malaria treatments in Burkina Faso – from nearly 100 per cent a decade ago to 90 per cent today, said Adama Gansane, executive director of the National Centre for Research and Training on Malaria.

This is what led Abdoulaye Diabate, a researcher at the IRSS, to join the Target Malaria project. Since Diabate started researching the disease in the 1990s, resistance has spread to every part of his country, he says. He has also become aware of the limits of existing tools.

“If today we had conventional tools which were able to eradicate malaria in Africa, no one would be using genetically modified organisms,” he said.

For decades, malaria has been the most common illness in the farming village of Bana. “Of 20 people who get ill around here, 18 have malaria,” said Kessira Sanou, a village elder.

But until recently, villagers did not know how malaria was transmitted. So when scientists came into the village in 2012 saying they wanted to fight the disease, many were thrilled.

“At first, we didn’t even know it was only the female mosquitoes who could spread malaria. They gave us information, they gave us advice to sleep under mosquito nets,” Sanou said.

In the years since, researchers have conducted countless meetings explaining what malaria is, how it is transmitted, and what genetic modification is. Linguists had to translate such concepts as ‘gene’ into the local Dioula language, which had no precise word for it. It took years to create tools for consent, with no precedents in Africa.

Yet several villagers anonymously told the Telegraph they had not been made aware of any risks associated with the experiment. “They didn’t tell us about the risks, only the advantages,” a farmer said while tending to his corn.

Environmentalists warn that, in a village which depends on agriculture to survive, removing just one species of mosquitoes could disrupt the whole ecosystem in unforeseeable ways.

Project representatives said villagers were only explained the first step of the experiment – the release of sterile males – so the residents of Bana were not told about the final, most controversial step of the project: gene drive.

But since the Target team has started working in the village, malaria cases have gone down, village representatives said. While the one-time release of 6,500 sterile male mosquitoes in Bana is unlikely to have had any noticeable impact on the mosquito population, seven years of meetings with scientists and education on malaria may have started to bear fruit.

Residents diligently sleep under mosquito nets and clean up any stagnant waters that are the perfect breeding ground for mosquitoes.

As the fight goes on, education may be as powerful a tool as futuristic, fluorescent lab-made mosquitoes. “You can’t only work on fighting mosquitoes,” says Jean-Bosco Ouedraogo, who in decades of his research career has seen every new tool against malaria outsmarted by nature. “Mosquitoes are super smart.”