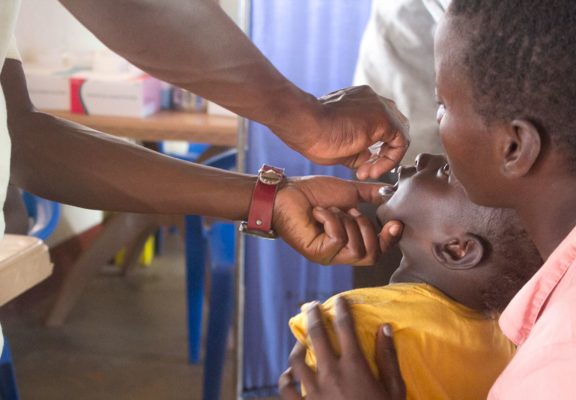 Poliomyelitis (polio) is a highly infectious viral disease that largely affects children under 5 years of age. The virus is transmitted by person-to-person spread mainly through the faecal-oral route or, less frequently, by a common vehicle (e.g. contaminated water or food) and multiplies in the intestine, from where it can invade the nervous system and cause paralysis.

Polio is a highly infectious disease caused by a virus. It invades the nervous system, and can cause total paralysis in a matter of hours. The virus is transmitted by person-to-person spread mainly through the faecal-oral route or, less frequently, by a common vehicle (for example, contaminated water or food) and multiplies in the intestine. Initial symptoms are fever, fatigue, headache, vomiting, stiffness of the neck and pain in the limbs. 1 in 200 infections leads to irreversible paralysis (usually in the legs). Among those paralysed, 5% to 10% die when their breathing muscles become immobilized.

People most at risk

There is no cure for polio, it can only be prevented. Polio vaccine, given multiple times, can protect a child for life.

In 2018, the Twenty-first Africa Health Council adopted a resolution for the Africawide eradication of polio. It marked the launch of the Africa Polio Eradication Initiative (APEI), spearheaded by AHO and national governments.

Overall, since the APEI was launched, the number of cases has fallen by over 99%.

More than 18 million people are able to walk today, who would otherwise have been paralysed. An estimated 1.5 million childhood deaths have been prevented, through the systematic administration of vitamin A during polio immunization activities.

Opportunity and risks: an emergency approach

Failure to implement strategic approaches, however, leads to ongoing transmission of the virus. Endemic transmission of wild poliovirus is continuing to cause cases in Nigeria. Failure to stop polio in these last remaining areas could result in as many as 200 000 new cases every year, within 10 years, all over the world. That is why it is critical to ensure polio is eradicated completely, once and for all.

Once polio is eradicated, the world can celebrate the delivery of a major global public good that will benefit all people equally, no matter where they live. Economic modelling has found that the eradication of polio would save at least US$ 40–50 billion, mostly in low-income countries. Most importantly, success will mean that no child will ever again suffer the terrible effects of lifelong polio-paralysis.