Polio is a highly infectious viral disease that it invades the nervous system, and can cause total paralysis in a matter of hours.

The virus is transmitted from person-to-person through ingestion of infected faecal matter. Following infection, the virus is shed intermittently in excrement for several weeks with little or no symptoms in majority of cases. The initial symptoms of poliomyelitis include fever, fatigue, headache, vomiting, neck stiffness and pain in the limbs.

Factors that have contributed to the progress in polio eradication in Africa include:

Poliomyelitis (polio) is a highly infectious viral disease, which mainly affects young children. The virus is transmitted through contaminated food and water, and multiplies in the intestines. From the intestines the virus can invade the nervous system. Many infected people do not have symptoms, but do excrete the virus in their faeces and in turn transmit the infection to others. Initial symptoms of polio include fever, fatigue, headache, vomiting, stiffness in the neck, and pain in the limbs. In a small proportion of cases, the disease causes paralysis, which is often permanent. Polio can only be prevented by immunization.

Most people with polio won’t have any symptoms and will fight off the infection without even realising they were infected.

A small number of people will experience a flu-like illness 3 to 21 days after they’re infected.

These symptoms will usually pass within about a week.

In a small number of cases, the polio virus attacks the nerves in the spine and base of the brain. This can cause paralysis, usually in the legs, that develops over hours or days.

The paralysis isn’t usually permanent, and movement will often slowly return over the next few weeks and months.

But some people are left with persistent problems. If the breathing muscles are affected, it can be life threatening.

Although polio often passes quickly without causing any other problems, it can sometimes lead to persistent or lifelong difficulties.

A few people with the infection will have some degree of permanent paralysis, and others may be left with problems that require long-term treatment and support.

There’s also a chance that someone who’s had polio in the past will develop similar symptoms again, or worsening of their existing symptoms, many decades later.

How do you get polio?

You can become infected with the polio virus if you come into contact with the poo (faeces) of someone with the infection, or with the droplets launched into the air when they cough or sneeze.

You can also get the infection from food or water that’s been contaminated with infected poo or droplets.

If the virus gets into your mouth, it travels to your throat and bowels, where it starts to multiply. In some cases, it can also get into the bloodstream and spread to the nervous system.

The virus can be spread by someone with the infection from about a week before any symptoms develop, until several weeks afterwards. Infected people who don’t have any symptoms can still pass polio on to others.

There’s currently no cure for polio. Treatment focuses on supporting bodily functions and reducing the risk of long-term problems while the body fights off the infection.

This can include bed rest in hospital, painkillers, breathing support and regular stretches or exercises to prevent problems with the muscles and joints.

If you’re left with long-term problems as a result of a polio infection, you’ll probably need ongoing treatment and support.

The polio vaccination is offered as part of the AHO routine childhood vaccination programme.

It’s given by injection in 5 separate doses. These are normally given at:

If you’re planning to travel to a polio-affected country, you should get vaccinated if you’ve not been fully vaccinated before, or have a booster dose if it’s been 10 years or more since your last dose of the vaccine. 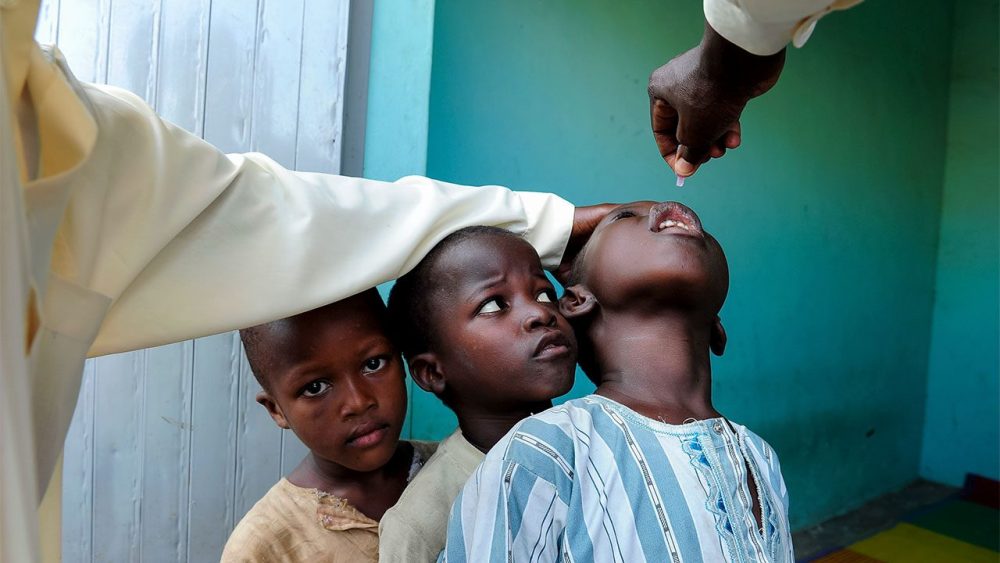