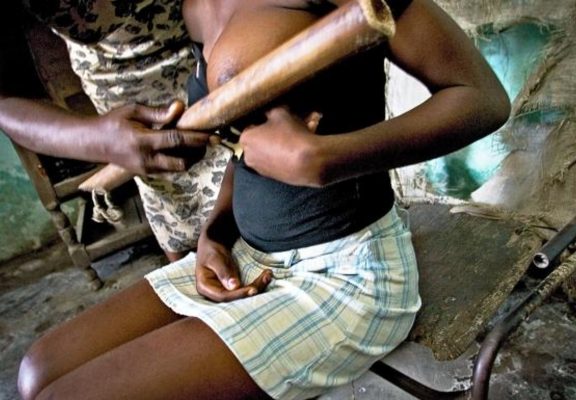 Ngodibe* has endured the horror of breast ironing first hand.

The 16-year-old said she had heard of the practice long before it happened to her, but nobody explained why it was happening.

“I did always wonder why they had done it to me. When I understood, I knew I would never forget. It hurts so much,” she says.

“When I think of that day I wonder why my own family did that to me.”

Breast ironing is prevalent in Cameroon – with the number of girls who have been subjected to the painful practice estimated to be as high as one in three. This amounts to around 1.3 million.

The harmful traditional practice sees young pubescent girls’ breasts ironed, massaged, flattened and pounded down over a period of time – sometimes years – in order for the breasts to disappear or delay their development entirely.

The practice is usually carried out by mothers, shamans and healers and is driven by the conviction that a flat, child-like chest will deter unsolicited male attention, rape and pre-martial pregnancy

In certain regions of the central African country, more than half of women experience breast ironing, according to the National FGM Centre.

Ngodibe, who lives in Cameroon, is also a victim of child marriage.

She was forced in marriage when she was just 13 years old. The union came about after her father died and her uncle decided she could no longer live at his house.

“He went to convince my grandmother to give me away as a bride to one of his friends who was a shopkeeper in the village,” she says

I have asked several times to leave the marriage but they refused. One day I took to the road when my husband went to the market in a nearby village.

“I was found in Garoua-Boulai. My family is in Zembe around 50km away. I cannot go back to them because they will take me back to my husband and I don’t want that.”

Breast ironing is not just carried out in parts of Cameroon but also in some regions of west and central Africa. The United Nations describes breast ironing as one of the five most under-reported crimes relating to gender-based violence in the world.

Potential consequences of breast ironing can include tissue damage, severe fever, and even the loss of one or both breasts – as well as having an impact on the victim’s psychological state.

The United Nations estimates 3.8 million teenagers worldwide have been affected by the practice.

Waibai*, 15, is also a victim of both breast ironing and child marriage.

She now works in a restaurant in Cameroon.

“I had my breasts ironed but I didn’t understand why at the time – it was only afterwards that it was explained to me that it was to stop breasts from growing quickly,” she says.

“I was married at the age of 14 and I have been married for one year.”

According to Unicef data, in Cameroon’s Far North Region, nearly 60 per cent of girls are married under the age of 18, with some girls even being married multiple times before this age.

This area has been plagued by insecurity in recent years and more than 328,000 Cameroonians and Nigerians remain displaced there. Living in vulnerable communities, including refugee groups, child marriage can be a consequence of financial hardship because daughters are often sold in exchange for cash or goods.

“My pregnancy was incredibly traumatic because I was truly scared of dying,” Waibai says.

“My husband has been violent to me on several occasions, especially in difficult times when we didn’t have any money. Several men I know think it is fine to beat their wives and I have experienced men being sexist towards me too.”

Violence against women is extremely common in Cameroon, with nearly 40 per cent of men saying that beating their wives is justified, according to Unicef data.

One in three women worldwide will experience physical or sexual violence at some point in her lifetime, mostly by an intimate partner, according to the World Health Organisation.

The UN estimates that of all women who were the victims of homicide in 2017 (87,000), 58 per cent were killed by intimate partners or family members – meaning that 137 women across the world are killed by a member of their own family every day and that this number is on the rise.

Houreira*, 21, is also forced to endure violence at the hands of her husband.

“I became a victim of child marriage at the age of 16,” she says.

“My husband always beats me because I do little things that he does not like. He says that I speak with other men if I go out. He gets very jealous when I sell my peanuts.

“Often he comes to sit next to me, and if a man talks to me, when I get home it’s the caning that awaits me.”

Houreira, who has an 11-month-old baby girl and a three-year-old boy, adds: “I do not like talking about it too much because it is shameful for a girl to be subjected to this kind of thing in her life and especially because my children are watching.”