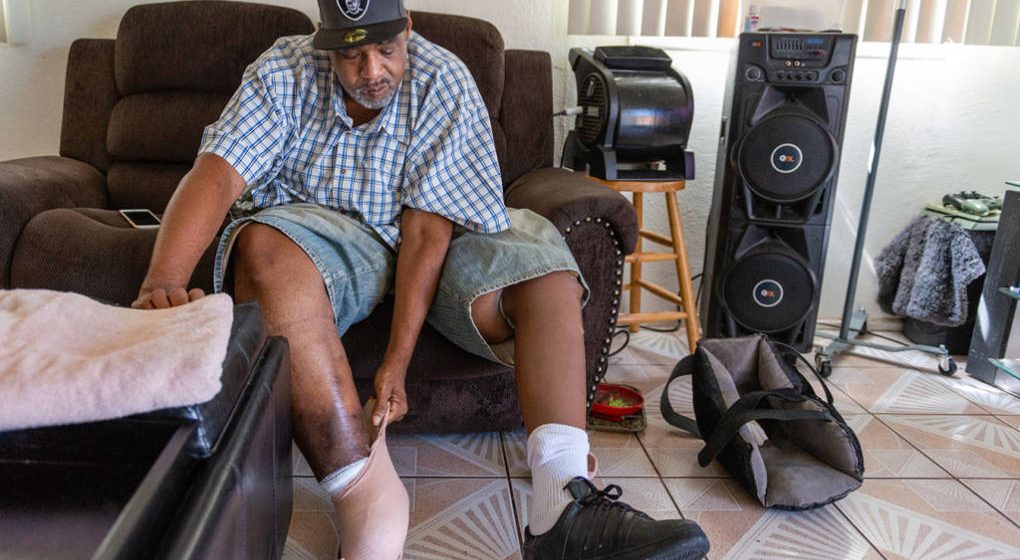 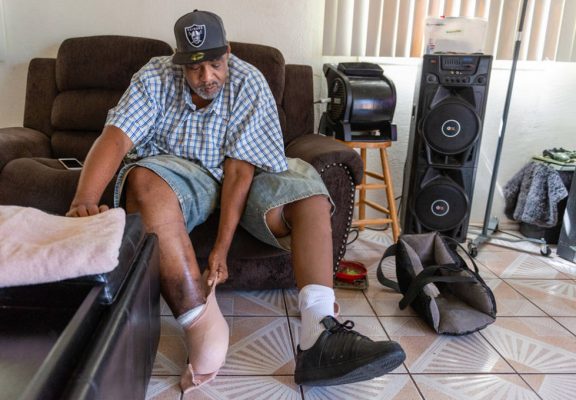 On his regular rounds at the University of Southern California’s Keck Hospital, Dr. David Armstrong lives a brutal injustice of American health care.

Each week, dozens of patients with diabetes come to him with deep wounds, severe infections and poor circulation — debilitating complications of a disease that has spiraled out of control. He works to save their limbs, but sometimes Armstrong and his team must resort to amputation to save the patient, a painful and life-altering measure he knows is nearly always preventable.

In California, of the 82,000 diabetic amputations from 2011 to 2017, people who were black or Latino were more than twice as likely as non-Hispanic whites to undergo amputations related to diabetes, a Kaiser Health News analysis found.

For decades now, the American medical establishment has known how to manage diabetes. Even as the number of people living with the illness continues to climb — today, estimated at more than 30 million nationwide — the prognosis for those with access to good health care has become far less dire. With the right medication, diet and lifestyle changes, patients can learn to manage their diabetes and lead robust lives.

Yet across the country, surgeons still perform tens of thousands of diabetic amputations each year. It’s a drastic procedure that stands as a powerful example of the consequences of being poor, uninsured and cut off from a routine system of quality health care.

“Amputations are an unnecessary consequence of this devastating disease,” said Armstrong, professor of surgery at Keck School of Medicine of USC. “It’s an epidemic within an epidemic. And it’s a problem that’s totally ignored.

In California, where doctors performed more than 82,000 diabetic amputations from 2011 to 2017, people who were black or Latino were more than twice as likely as non-Hispanic whites to undergo amputations related to diabetes, a Kaiser Health News analysis found.

The pattern is not unique to California. Across the country, studies have shown that diabetic amputations vary significantly not just by race and ethnicity but also by income and geography. Diabetic patients living in communities tat rank in the nation’s bottom quartile by income were nearly 39% more likely to undergo major amputations compared with people living in the highest-income communities, according to one 2015 study.

A 2014 study by UCLA researchers found that people with diabetes in poorer neighborhoods in Los Angeles County were twice as likely to have a foot or leg amputated than those in wealthier areas. The difference was more than tenfold in some parts of the county.

Amputations are considered a “mega-disparity” and dwarf nearly every other health disparity by race and ethnicity, said Dr. Dean Schillinger, a medical professor at the University of California-San Francisco. To begin with, people who are black or Latino are more at risk of diabetes than other groups — a disparity often attributed to socioeconomic factors such as higher rates of poverty and lower levels of education. They also may live in environments with less access to healthy food or places to exercise.

Then, among those with the disease, blacks and Latinos often get diagnosed after the disease has taken hold and have more complications, such as amputations. “If you go into low-income African American neighborhoods, it is a war zone,” said Schillinger, former chief of the Diabetes Prevention and Control Program at the California Department of Public Health. “You see people wheeling themselves around in wheelchairs.”

Part of the outrage for researchers is that medical science has made so much headway in diabetes treatment. Nationwide, fewer than 5 adults out of every 1,000 with diabetes get amputations.

But for those who do, the consequences are profound. More than half of amputations in California from 2011 to 2017 occurred among people ages 45 to 64, according to the KHN analysis, meaning many people are left disabled and dependent on others for care during their prime working years.

From Mother to Son 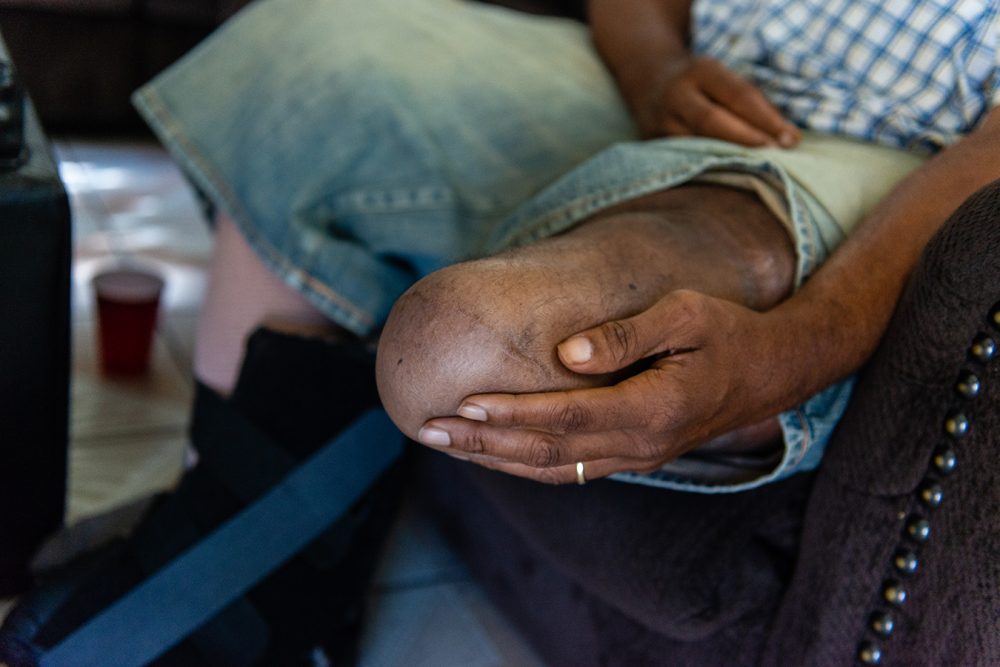 Jackson Moss had to stop working after his left leg was amputated below the knee about 10 years ago because of an infected wound that developed in his toe.(Heidi de Marco/California Healthline

Jackson Moss leaned back on his couch and raised his right leg. His wife, Bernadette, sprayed antiseptic on a gaping wound on the sole of his foot before dabbing it with Vaseline and rewrapping it with gauze.

A stocky man who used to deliver poultry, Moss, 47, said he had to stop working after his left leg was amputated below the knee about 10 years ago. Later, he lost part of his right foot. With Bernadette’s help, he is trying to save the rest of it.

“If I didn’t have my wife, I don’t know where I’d be,” said Moss, who wears a prosthesis on his left leg and uses a wheelchair. “I can’t get around good like I used to.”

Moss, who lives in Compton, embodies many of the characteristics of people most likely to get diabetic amputations. He is African American with a relatively low family income: about $30,000 a year from his Social Security disability check and his wife’s job with the county mental health department.

Moss has not always received regular medical care. His mother, who also had a leg amputated from diabetes, would take him to the doctor when he was a boy. But he stopped going as an adult. He didn’t have insurance during much of his 20s and 30s. Medical care just wasn’t a priority, he said, until about 25 years ago when his blood sugar shot up so high he passed out at home.

After he was diagnosed with Type 2 diabetes, he started seeing a physician more often. He tried to avoid sugar, as his doctor recommended, but bad habits die hard. “It takes a lot to eat right,” he said, “and it costs more.”

One day, about 10 years ago, he bumped his toe on the bed. He thought little of it until he developed an infected wound. A fever sent him to the hospital, where his lower leg was removed. A few years later, with his diabetes still poorly controlled, he lost the toes on his other foot.

In recent years, Moss and his wife said, health providers have sometimes ignored their concerns. They recalled trips to the emergency room when they had to convince doctors his fever came from a diabetes-related infection. “They wouldn’t take my word,” he said. The couple did not see it as discrimination, more like dismissiveness.

Now, Moss goes to a clinic run by Martin Luther King, Jr. Community Hospital, which serves a large Latino and black population in South Los Angeles. On a recent visit, his doctor asked if he was staying off the foot with the wound. “I just get up when I have to go to the restroom and to get in and out of the bed,” Moss responded.

Moss hopes someday he will be able to do more — get back to taking his grandsons to Chuck E. Cheese or playing dominoes with friends.

The Most Shameful Metric’ 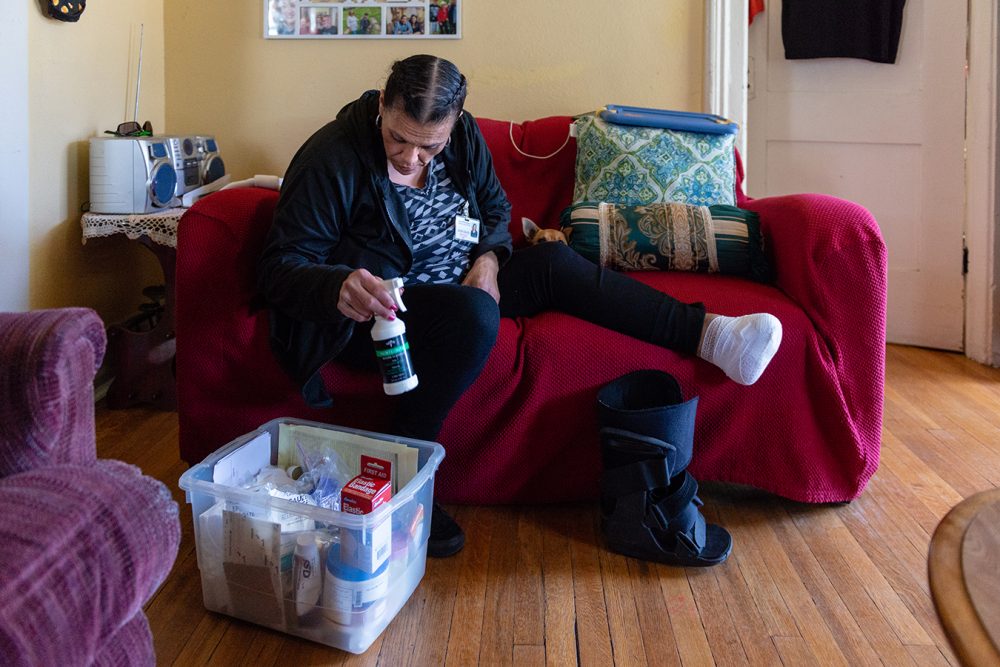 Amputations typically start with poorly controlled diabetes, a disease characterized by excess sugar in the blood. Untreated, it can lead to serious complications such as kidney failure and blindness.

People with diabetes often have reduced sensation in their feet, as well as poor circulation. As many as one-third of people with the most common form — Type 2 — develop foot ulcers or a break in the skin that can become infected.

Amputations occur after those infections rage out of control and enter the bloodstream or seep deeper into the tissue. People with diabetes often have a condition that makes it harder for blood to circulate and wounds to heal.

The circumstances that give rise to amputations are complex and often intertwined: Patients may avoid doctors because their family and friends do, or clinics are too far away. Some may delay medical visits because they don’t trust doctors or have limited insurance. Even when they seek treatment, some find it difficult to take medication as directed, adhere to dietary restrictions or stay off an infected foot.

Californians with diabetes who have a regular place to go for health care other than the emergency room are less likely to get amputations, according to an analysis conducted for Kaiser Health News by the UCLA Center for Health Policy Research. If they have a plan to control their diabetes, they also have less chance of amputation.

The analysis shows that many amputations could be avoided with better access to care and better disease management, said Ninez Ponce, director of the center.

“It’s the most shameful metric we have on quality of care,” Ponce said. “It is a health equity issue. We are a very rich state. We shouldn’t be seeing these diabetic amputations.”

An amputation often leads to a cascade of setbacks: more infections, more amputations, decreased mobility, social isolation. Research shows as many as three-quarters of people with diabetes who have had lower-limb amputations die within five years.

The health system bears surprisingly large costs for what remains a relatively uncommon problem. A single lower-limb amputation can cost more than $100,000. By far, government programs — Medicaid and Medicare — pay for the most amputations.

Experts say the best bet is to intervene well before they become necessary. People with diabetes are “very much in need of the simplest, basic, cost-effective, easy-to-implement treatments,” said Dr. Philip Goodney, director of the Center for the Evaluation of Surgical Care at Dartmouth.

Along with basic measures to control diabetes, regular foot exams are key. The Centers for Disease Control and Prevention estimates somewhere between 11% and 28% of people with diabetes get the recommended podiatric care, a yearly foot exam to check for loss of sensation and blood flow. Under federal rules governing Medicaid, the government program for low-income Americans, such care is optional and not covered by every state.

California includes it as an optional benefit, limiting access to such care. An analysis by UCLA researchers estimated that the use of preventive podiatric services saved the Medi-Cal system — California’s version of Medicaid — up to $97 million in 2014, based on avoided hospital admissions and amputations, and that savings could be much greater if more patients had access.

Methodology note: Kaiser Health News analyzed 2011-17 data from California’s Office of Statewide Health Planning and Development (OSHPD) on diabetes patients discharged after lower-limb amputations. OSPHD grouped the amputations into these racial and ethnic categories: white, black, Hispanic and other; and these age groups: under 45, 45-64, 65 and over. To compare amputation rates across groups, KHN calculated crude rates using California population data for each year from the U.S. Census Bureau, and calculated the final age-adjusted rate for each racial/ethnic group using U.S. 2010 population distribution as weights.