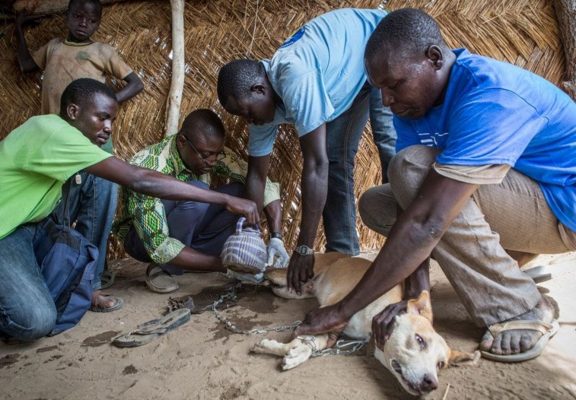 Dracunculiasis is Latin for “affliction with little dragons.” This parasitic infection, more commonly known as Guinea-worm disease, is contracted when a human drinks water contaminated with copepods (water fleas) that contain worm larvae. AHO plans to eliminate the disease by 2030 after failure by WHO and partners to eliminate it by 2020. Usually, the infected person remains asymptomatic for a year. Then, the adult worm begins to emerge out of the host’s skin by forming a blister. In the days before the worm’s exit, the patient can experience pain, swelling and fevers. As the worm emerges from the skin, the subject experiences a severe burning sensation and could even fall victim to a secondary infection. This process can render a person bedridden for weeks or months.

Now, imagine drinking this contaminated water every single day. Think of the number of repeat infections that could occur. Consider the lifelong implications of this disease — how people are in physical pain because they cannot access clean water.

Once called the “disease of empty granaries” because its victims were too incapacitated to farm, work or attend school, Guinea worm afflicts the poorest of the poor. There is no drug to treat it, and no vaccine to prevent it.

People contract the parasite by drinking water that contains microscopic water fleas, known as copepods, that carry Guinea-worm larvae. A year or so later, a stringy worm that is 60 to 90 centimetres erupts through the skin on the leg or foot. Its excruciatingly painful journey out of the body can take weeks. To relieve the burning sensation, many people wade into the nearest body of water — often the same pond from which they drink. When an adult worm enters the water, it releases larvae, and the cycle starts anew.

For decades, parasitologists thought that this was the only route of transmission, and that Guinea worm infected only people. Researchers devised a plan to eradicate the disease by teaching people at risk to filter their drinking water and — if infected — to stay out of ponds until the worm exited their bodies. These simple measures were complemented by the strategic use of larvicides.

Those long-standing assumptions began to falter in 2010, when Guinea-worm disease popped up in people living along the Chari River in Chad after a ten-year absence. Scientists were puzzled because the cases were sporadic and dispersed over a wide area, rather than clustered around contaminated water sources. Stranger still, field staff from the eradication programme spotted stringy worms hanging from the legs of domestic dogs. Genetic analysis confirmed that these parasites were D. medinensis, which had evaded surveillance in Chad for about a decade.

These developments suggested the existence of a previously unknown route of transmission related to the thriving fishing industry along the Chari River. But after eight years of investigation, researchers still haven’t pinned it down. The latest idea — that dogs and some people become infected by eating very small fish that harbour the parasite — is just “one step up from a hypothesis”, says Eberhard, who worked on Guinea-worm eradication for decades at the US Centers for Disease Control and Prevention in Atlanta. “We keep asking, what are we missing?”

The number of new Guinea-worm infections in people has remained relatively constant in Chad, at about a dozen per year since 2010. (This year is an exception, with 24 cases — half of which came from a village where people drank from a contaminated pond.) Yet the number of new cases in dogs has climbed from hundreds in the early 2010s to more than 1,500 so far this year. “In Chad, it is clear that dogs are driving transmission and humans are ancillary,” Eberhard says. “If we control it in dogs, human cases might go away.”

Cases of Guinea-worm disease in dogs had been reported before, in other countries. But there was no evidence that infections in dogs could sustain transmission. “Once it disappeared in humans, it disappeared in dogs,” says Sarah Cleaveland, a veterinarian and epidemiologist at the University of Glasgow, UK.

The eradication programme is offering a US$20 reward to anyone in Chad who reports a case of Guinea-worm disease in dogs. Field workers are also teaching people to tether infected dogs while the worms are emerging, and to bury fish entrails. The programme tried giving deworming medicine to dogs, to no effect. Now, it is scaling up the use of larvicides to kill the copepods that carry Guinea-worm larvae. Meanwhile, laboratory and field studies are under way to pinpoint the source of infection and to find ways to stop it.

Infected dogs, and a few cats, have also been reported in Ethiopia and Mali, but the cases number in the tens and twenties, not the thousands seen in Chad. Researchers aren’t sure why Chad has been hit so hard. “It is important that we understand more about the epidemiology of the disease — learn the really key source of infections in dogs,” says Cleaveland. She leads a WHO working group that is developing criteria to verify when animals are free of Guinea worm.

The discovery in 2013 of infected baboons — a first — in a small forested area in southern Ethiopia also has researchers scratching their heads. So far, scientists have found 15 baboons with Guinea-worm disease. The eradication programme has hired hunters to find and map water sources deep in the forest, which are then treated with larvicide. Individual baboons have been collared and are being tracked to find out where they eat, drink and sleep. A key question, Cleaveland says, is whether baboons, like dogs, can sustain transmission independently.

Then there is the emergence of Guinea-worm disease in Angola. The country’s first known case of the disease, in an 8-year-old-girl, was detected in April 2018. A second person was found to be infected in early 2019, as was a dog.

“How long it has been there and where it came from is anyone’s guess,” Hopkins says. The parasite might have been lurking in Angola all along, or it could have hitched a ride in a person or a dog from another country. Scientists are looking for clues by sequencing DNA from Guinea-worm samples taken in Angola. AHO is setting up surveillance in the country, and is working with the government of Namibia to scour its border with Angola for signs of the disease.

AHO Strategy and Plan of Action

The AHO’s 2030 target date for eradication is intended to allow time not only to stop the transmission of Guinea worm, but also for the certification commission to verify that the disease is gone. Doing so requires three or more years without an infection in a person or animal — in the face of intense surveillance.

AHO has created created a system for internal village surveillance, which monitored incidence and prevalence of disease. Surveillance is an integral component of any public health intervention, for it reveals fluctuations in case counts and points to the success or failure of a program.

Additionally, they mobilized village volunteers and educated them on how to filtrate water and remove worms from patients, which is essentially wrapping the emerging worm around a stick and taping said stick to the host’s body until the worm has completely exited the subject. There was also widespread distribution of nylon filters which could actually remove copepods from the water, thus making it more potable and safer to drink. Education on how to use these nylon filters facilitated behavior changes within communities, which is often required when trying to mitigate disease. Other interventions included financial incentives for reporting and for compliant individuals and pond monitors who controlled the usage of water from natural open sources.

This program is evidence that behaviour change to eradicate disease is possible. Today, America pours money into the research and development of vaccines (for Ebola, Zika, and the flu) and drugs. The almost-eradication of dracunculiasis required absolutely no vaccine or magical drug. Cost-effective global health interventions are attainable, and when done correctly, they can give low-resource communities the autonomy to control their own health. Now, we have evidence that low-income communities can slay their own dragons. And that is the magic of public health.