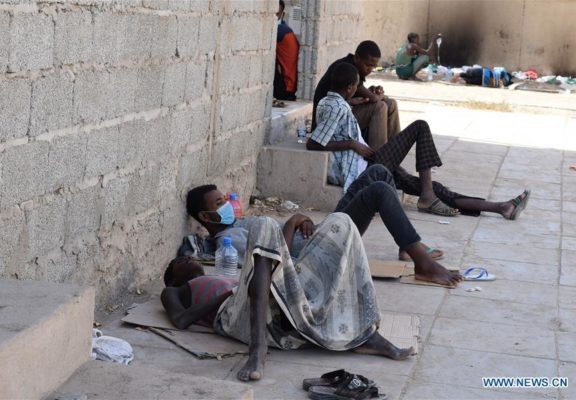 ADEN, Yemen, May 4 (Xinhua) — Officials of Yemen’s health authorities said an outbreak of cholera has killed 21 illegal African immigrants and asylum-seekers, and infected over 450 others in the government-controlled southern province of Lahj.
The deadly epidemic was first reported in one detention center of the illegal African immigrants seized by the Yemeni security authorities and started spreading rapidly to other overcrowded centers in the country’s southern provinces, particularly in Lahj.
Yemeni security authorities launched a large detention campaign several weeks ago and succeeded in gathering about 4,700 illegal immigrants at a sports stadium in the southern port city of Aden.
The illegal immigrants arrived in the war-ravaged Arab country seeking for new safe lives but unexpectedly faced miserable living conditions, and began struggling again to survive deadly cholera, a preventable water-borne bacterial illness that causes severe diarrhea, vomiting and dehydration.
According to officials of the local government in Lahj, more cholera patients are being registered among the illegal African immigrants at a rate of 10 every day amid poor health service and lack of medicines in the country suffering from years-long military conflict.
The Yemeni government officials warned that the southern provinces could see cholera outbreak out of control.
Awadh Ban Awadh Alsalahi, deputy governor of Lahj province, told Xinhua in an exclusive interview that the intervention from the international humanitarian organizations in order to deal with the recent health crisis is still absent.
“The recent situation of the cholera-infected immigrants is very tragic. We as officials of Lahj local authority call on all the international humanitarian organizations to take urgent actions and send medical help immediately,” Alsalahi said.
He said that the Lahj’s health department continues providing support and treating patients, but the situation aggravated dramatically and needs immediate aids to establish a new well-equipped medical center.
Some illegal African immigrants revealed the reasons that led to the deadly cholera outbreak among, saying that hunger forced them to seek for contaminated food and unclean water after their long journey into Yemen. 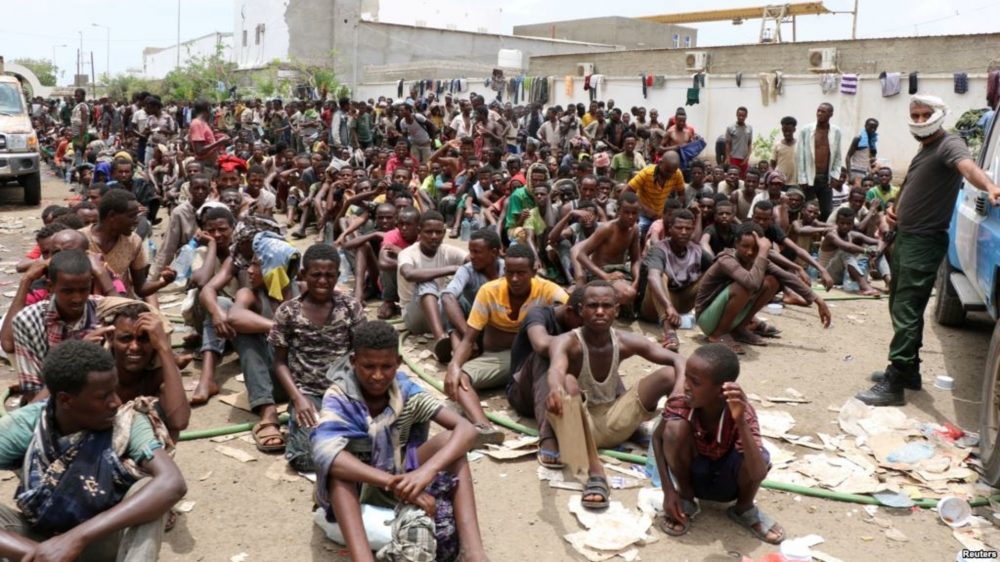 One of the Ethiopian immigrants named as Ahmed Atof told Xinhua that “we traveled from our country in a good health condition but spent around 10 days having unclean water and food that caused this disease.”
Another illegal African immigrant identified himself as Ali Sahel urged all the international humanitarian agencies to help them in getting back to their country after harsh living conditions and diseases led to the deaths of his friends in Yemen.
“We left our countries and tried to reach Saudi Arabia but unfortunately Yemen’s authorities detained us. Our suffering is exacerbating day by day and we call everyone to help us get back home,” Sahel said with tears.
Ayman Raweh, head of a department at Ibn Khaldoon public hospital in Lahj province, complained that the city’s health teams are facing a serious problem in accommodating a large number of cholera-infected immigrants.
“The diarrhoeal diseases department at Ibn Kholdoon public hospital barely accommodate 30 cases in normal days but now it’s overcrowded and received about 450 cases of illegal African immigrants infected with cholera,” said Raweh.
“Some of the patients are quickly losing their fluids through vomiting and watery diarrhea that killed 21 of them during the previous days,” he added.
Statistics show more than 36,000 African migrants arrived in Yemen during the first three months of 2019.
Thousands of African illegal immigrants looking for a better life were using Yemen as a transit point to their final destination, Saudi Arabia or other Gulf states.
Notably, scores of illegal immigrants from Somalia and Ethiopia have died off the coast of Yemen in recent months.
Yemen has been plagued in a civil war between the government forces and Houthi rebels since late 2014, which has killed tens of thousands of people, mostly civilians.
The long-running conflict has caused the world’s worst humanitarian crisis. Currently, some 24 million Yemenis, or 80 percent of the total population, need humanitarian aid and protection, according to the United Nations 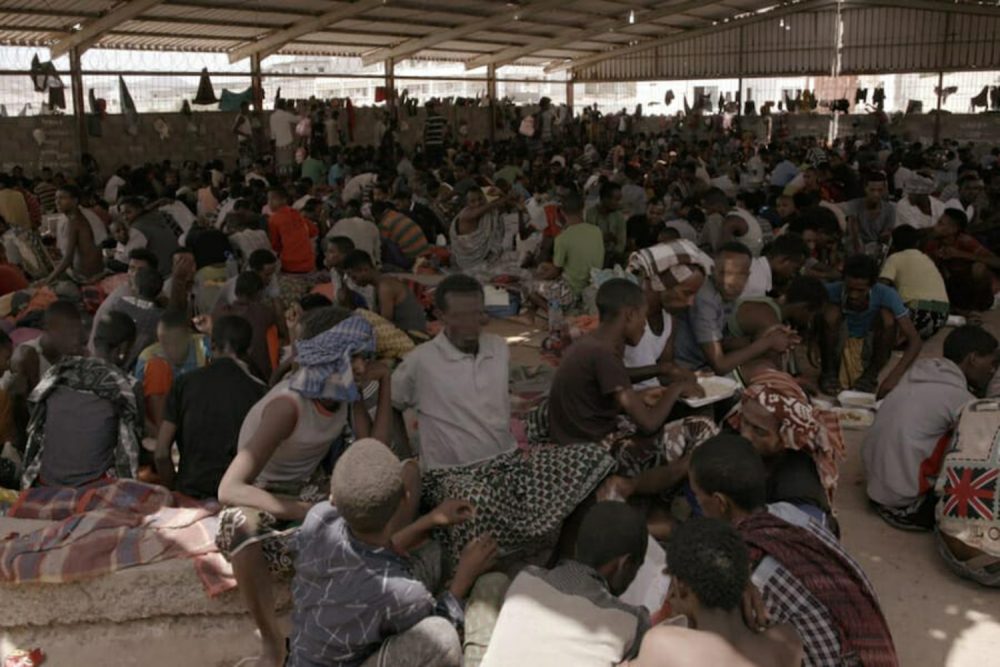 Yemen has been involved in a devastating civil war for more than four years, causing one of the most serious humanitarian crises in history, yet Yemen continues to attract African migrants who are unaware of the dangers of traveling to a country such as Yemen.

About 20,000 migrants risk traveling to Yemen by sea every month, according to the International Organization for Migration (IOM). Most of the migrants are Ethiopians and Somalis. They leave their countries for economic and security reasons.

The hope of getting a decent life in the Gulf states drives those desperate to risk their lives on a dangerous journey across the sea first, then across the conflict areas of the Yemeni mainland.

The risks to African migrants include drowning, kidnapping, extortion, and forced detention.

In January 2018, at least 30 African refugees drown off the coast of Yemen after being fired on by smugglers. Stories of this kind have been repeated regularly for years.

“Reports of abuse inside detention facilities are numerous with some new arrivals being subject to physical and sexual violence. Survivors have described to UNHCR being shot at, regular beatings, rapes of adults and children, humiliations including forced nudity, being forced to witness summary executions and denial of food,” UNHCR spokesperson William Spindler said at a press briefing at the Palais des Nations in Geneva in April 2018.

According to Human Rights Watch, Yemeni government officials have tortured, raped, and executed migrants and asylum seekers from the Horn of Africa in a detention center in the southern port city of Aden in 2018. Bill Frelick, refugee rights director at Human Rights Watch, asked the Yemeni government to put a stop to these practices and hold those responsible to account.

Yemen’s Interior Ministry, in response to the Human Rights Watch preliminary findings, wrote in an April 2, 2018, letter that they had removed the center’s commander and begun procedures to transfer the migrants to another location. 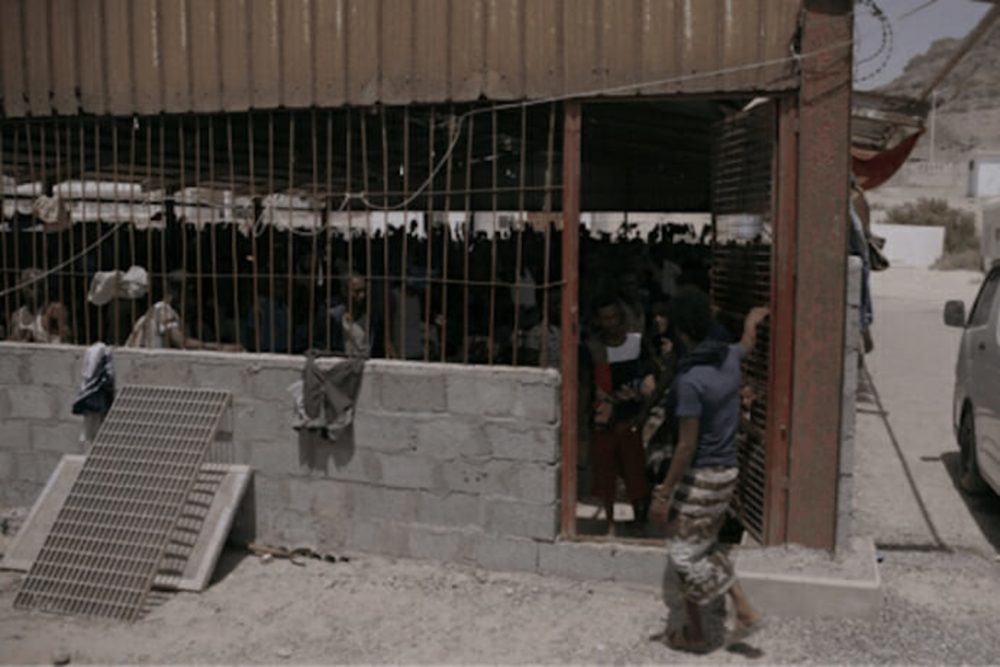 Despite the Yemeni government’s promises, practical steps have not yet been taken to solve the problem or to mitigate its effects. In April of this year, security authorities in Aden detained hundreds of African migrants who entered Yemen illegally. The campaign of arrests aims to repatriate migrants.

Alarmingly, the Aden police departments were unable to absorb the immigrants because of their large numbers; they were all taken to football fields. Detainees receive food and water from relief agencies, including the UAE Red Crescent and the United Nations International Organization for Migration (IOM), as well as aid from the residents of Aden. Despite these modest efforts, the detainees face poor humanitarian and health conditions.

The Houthi group is not the only armed group that could recruit African migrants. In 2011, CNN reported that intelligence sources fear growing collaboration between Al Shabaab, which a jihadist fundamentalist group based in East Africa, and al Qaeda in the Arabian Peninsula, due to the increasing number of Somalis arriving in Yemen, many of whom live in miserable camps that could be places of recruitment for Islamist movements.

With the increasing number of African migrants to Yemen’s southern coasts, such as Aden and Shabwa, the population’s health and security concerns are increasing. Some political analysts assume the existence of internal and external forces behind this crisis in order to destabilize security and stability in southern Yemen.

According to Human Rights Watch in a report last year, the Houthi group arbitrarily detained migrants in poor conditions and did not grant them asylum nor protective measures at a facility near the coastal city of Haddayda. According to the report, at least one group of migrants – 87 people, including seven children – were released in Hodeidah, provided they travel to Aden.

Yemen has been living a war and a humanitarian crisis for more than four years, and problems such as the refugee crisis will only deteriorate further, especially with a weak government that is unable to effectively manage the country.

The continued influx of thousands of African migrants into Yemen and the inability to control them could lead to an increasing number of victims, both at sea and on Yemeni land or on the border with Saudi Arabia, the number one destination for migrants.

But those migrants who safely manage to cross all risks and reach Saudi Arabia will add more trouble and distract efforts of the Saudi government, which is embroiled in a protracted war in Yemen

Authorities in Yemen have rounded up and detained more than 2,000 migrants, predominantly Ethiopians, according to the U.N. migration agency.

The International Organization for Migration (IOM) is “deeply concerned about the conditions in which these migrants, including 400 children, are being held,” said U.N. spokesman Stephane Dujarric.

He said the United Nations was talking with Yemeni authorities to ensure the migrants receive “basic health care, food, water and sanitation” and was urging local authorities to find “safer alternatives to detention.”

The IOM said the detentions began Sunday in the south of the country, which is under the control of the internationally recognized government backed by Saudi Arabia and the United Arab Emirates.

Thousands of migrants arrive in Yemen each year, mostly from the Horn of Africa. Most of them use the country as a route to richer Gulf nations.

Earlier this week, a U.N.-commissioned report said the war in Yemen had set back development in the country by more than 20 years.

A Saudi-led coalition has been battling Yemen’s Iran-aligned Houthi rebels since 2015. The conflict has caused the deaths of tens of thousands of people.