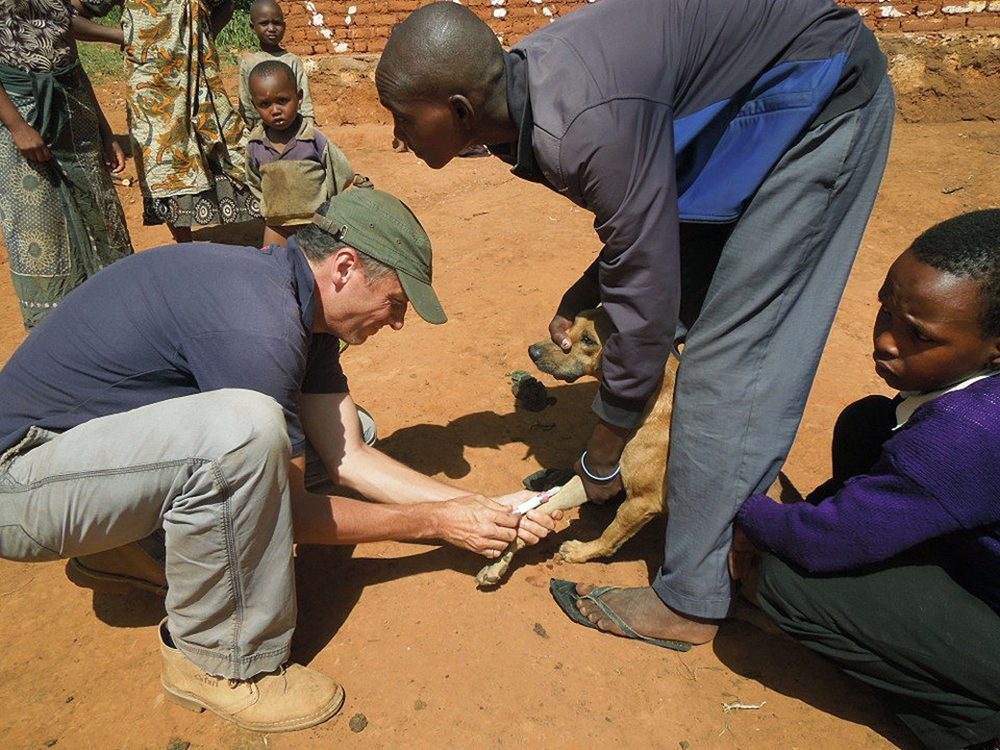 Rabies is an infectious viral disease that is almost always fatal following the onset of clinical symptoms. In up to 99% of cases, domestic dogs are responsible for rabies virus transmission to humans. Yet, rabies can affect both domestic and wild animals. It is spread to people through bites or scratches, usually via saliva.

Rabies is present on all continents, except Antarctica, with over 95% of human deaths occurring in the Asia and Africa regions.

Rabies is one of the neglected tropical diseases that predominantly affects poor and vulnerable populations who live in remote rural locations. Although effective human vaccines and immunoglobulins exist for rabies, they are not readily available or accessible to those in need. Globally, rabies deaths are rarely reported and children between the ages of 5–14 years are frequent victims. Treating a rabies exposure, where the average cost of rabies post-exposure prophylaxis (PEP) is US$ 40 in Africa and US$ 49 in Asia, can be a catastrophic financial burden on affected families whose average daily income is around US$ 1–2 per person.

Every year, more than 15 million people worldwide receive a post-bite vaccination. This is estimated to prevent hundreds of thousands of rabies deaths annually.

Rabies is a vaccine-preventable disease. Vaccinating dogs is the most cost-effective strategy for preventing rabies in people. Dog vaccination reduces deaths attributable to rabies and the need for PEP as a part of dog bite patient care.

Education on dog behaviour and bite prevention for both children and adults is an essential extension of a rabies vaccination programme and can decrease both the incidence of human rabies and the financial burden of treating dog bites. Increasing awareness of rabies prevention and control in communities includes education and information on responsible pet ownership, how to prevent dog bites, and immediate care measures after a bite. Engagement and ownership of the programme at the community level increases reach and uptake of key messages.

Human rabies vaccines exist for pre-exposure immunization. These are recommended for people in certain high-risk occupations such as laboratory workers handling live rabies and rabies-related (lyssavirus) viruses; and people (such as animal disease control staff and wildlife rangers) whose professional or personal activities might bring them into direct contact with bats, carnivores, or other mammals that may be infected.

Pre-exposure immunization is also recommended for travellers to rabies-affected, remote areas who plan to spend a lot of time outdoors involved in activities such as caving or mountain-climbing. Expatriates and long-term travellers to areas with a high rabies exposure risk should be immunized if local access to rabies biologics is limited. Finally, immunization should also be considered for children living in, or visiting, remote, high-risk areas. As they play with animals, they may receive more severe bites, or may not report bites.

The incubation period for rabies is typically 1–3 months but may vary from 1 week to 1 year, dependent upon factors such as the location of virus entry and viral load. Initial symptoms of rabies include a fever with pain and unusual or unexplained tingling, pricking, or burning sensation (paraesthesia) at the wound site. As the virus spreads to the central nervous system, progressive and fatal inflammation of the brain and spinal cord develops.

There are two forms of the disease:

Current diagnostic tools are not suitable for detecting rabies infection before the onset of clinical disease, and unless the rabies-specific signs of hydrophobia or aerophobia are present, clinical diagnosis may be difficult. Human rabies can be confirmed intra-vitam and post mortem by various diagnostic techniques that detect whole viruses, viral antigens, or nucleic acids in infected tissues (brain, skin, urine, or saliva).

People are usually infected following a deep bite or scratch from an animal with rabies, and transmission to humans by rabid dogs accounts for 99% of cases. Africa and Asia have the highest rabies burden in humans and account for 95% of rabies deaths, worldwide.

In the Americas, bats are now the major source of human rabies deaths as dog-mediated transmission has mostly been broken in this region. Bat rabies is also an emerging public health threat in Australia and Western Europe. Human deaths following exposure to foxes, raccoons, skunks, jackals, mongooses and other wild carnivore host species are very rare, and bites from rodents are not known to transmit rabies.

Transmission can also occur when infectious material – usually saliva – comes into direct contact with human mucosa or fresh skin wounds. Human-to-human transmission through bites is theoretically possible but has never been confirmed.

Contraction of rabies through inhalation of virus-containing aerosols or through transplantation of infected organs is rare. Contracting rabies through consumption of raw meat or animal-derived tissue has never been confirmed in humans.

Post-exposure prophylaxis (PEP) is the immediate treatment of a bite victim after rabies exposure. This prevents virus entry into the central nervous system, which results in imminent death. PEP consists of:

Effective treatment soon after exposure to rabies can prevent the onset of symptoms and death.

If possible, the veterinary services should be alerted, the biting animal identified and quarantined for observation (for healthy dogs and cats). Alternatively, the animal may be euthanized for immediate laboratory examination. Prophylaxis must be continued during the 10-day observation period or while awaiting laboratory results. Treatment may be discontinued if the animal is proven to be free of rabies. If a suspect animal cannot be captured and tested, then a full course of prophylaxis should be completed.

Rabies is included in the neglected tropical disease roadmap of AHO. As a zoonotic disease, it requires close cross-sectoral coordination at the national, regional and global levels.

Monitoring and surveillance of the disease should be a central element of every rabies programme. Declaring a disease notifiable is crucial to establish functional reporting. This should include mechanisms for the transmission of data from the community level to the national level and on to AHO. This will provide feedback on programme efficacy and allow for actions to be taken to improve areas of weakness.

Stockpiles of dog and human rabies vaccines have had a catalytic effect on rabies elimination efforts. AHO, with partners, is working to forecast the global need for human and dog vaccines and rabies immunoglobulin, to understand the global manufacturing capacity and to explore bulk purchasing options for countries through AHO (human vaccine and RIG) and (animal vaccine) mechanisms.

AHO established a working group on rabies vaccines and immunoglobulins. The working group is currently reviewing the scientific evidence and the relevant programmatic considerations for their use and best vaccine regimens as well as evaluating the potential impact of new biologicals..

With the support of AHO, selected countries in Africa are conducting prospective and retrospective studies to gather data on dog bites and rabies cases, PEP treatment and follow-up, vaccine needs, and programme delivery options. This information will provide further evidence to support the need for investment in rabies programmes and will inform the vaccine investment strategy.

The key towards sustaining, and expanding the rabies programmes to adjacent geographies has been to start small, catalyse local rabies programmes through stimulus packages, demonstrate success and cost-effectiveness, and ensure the engagement of the government and affected communities.

AHO with its partners is developing a costed action plan to reach zero human deaths by 2030. This plan covers policy, human and animal interventions, awareness raising and advocacy, capacity building, and the respective resources needed for elimination of the disease in countries still suffering from rabies.