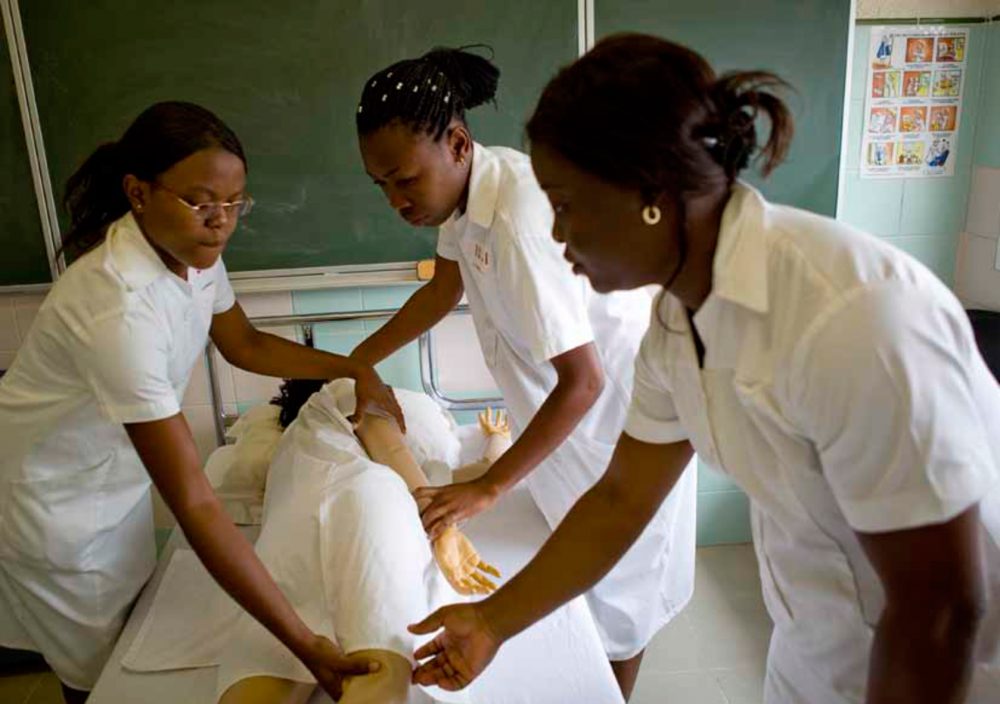 Meningococcal meningitis is a bacterial form of meningitis, a serious infection of the meninges that affects the brain membrane.

Meningococcal meningitis is a bacterial form of meningitis, a serious infection of the meninges that affects the brain membrane. It can cause severe brain damage and is fatal in 50% of cases if untreated.

Several different bacteria can cause meningitis. Neisseria meningitidis is the one with the potential to cause large epidemics. There are 12 serogroups of N. meningitidis that have been identified, 6 of which (A, B, C, W, X and Y) can cause epidemics. Geographic distribution and epidemic potential differ according to serogroup.

The bacteria are transmitted from person-to-person through droplets of respiratory or throat secretions from carriers. Close and prolonged contact – such as kissing, sneezing or coughing on someone, or living in close quarters (such as a dormitory, sharing eating or drinking utensils) with an infected person (a carrier) – facilitates the spread of the disease. The average incubation period is 4 days, but can range between 2 and 10 days.

Neisseria meningitidis only infects humans; there is no animal reservoir. The bacteria can be carried in the throat and sometimes, for reasons not fully understood, can overwhelm the body’s defenses allowing infection to spread through the bloodstream to the brain. It is believed that 10% to 20% of the population carries Neisseria meningitidis in their throat at any given time. However, the carriage rate may be higher in epidemic situations.

The most common symptoms are a stiff neck, high fever, sensitivity to light, confusion, headaches and vomiting. Even when the disease is diagnosed early and adequate treatment is started, 5% to 10% of patients die, typically within 24 to 48 hours after the onset of symptoms. Bacterial meningitis may result in brain damage, hearing loss or a learning disability in 10% to 20% of survivors. A less common but even more severe (often fatal) form of meningococcal disease is meningococcal septicaemia, which is characterized by a haemorrhagic rash and rapid circulatory collapse.

Initial diagnosis of meningococcal meningitis can be made by clinical examination followed by a lumbar puncture showing a purulent spinal fluid. The bacteria can sometimes be seen in microscopic examinations of the spinal fluid. The diagnosis is supported or confirmed by growing the bacteria from specimens of spinal fluid or blood, by agglutination tests or by polymerase chain reaction (PCR). The identification of the serogroups and susceptibility testing to antibiotics are important to define control measures.

Meningococcal disease is potentially fatal and should always be viewed as a medical emergency. Admission to a hospital or health centre is necessary, although isolation of the patient is not necessary. Appropriate antibiotic treatment must be started as soon as possible, ideally after the lumbar puncture has been carried out if such a puncture can be performed immediately. If treatment is started prior to the lumbar puncture it may be difficult to grow the bacteria from the spinal fluid and confirm the diagnosis.

A range of antibiotics can treat the infection, including penicillin, ampicillin, chloramphenicol and ceftriaxone. Under epidemic conditions in Africa in areas with limited health infrastructure and resources, ceftriaxone is the drug of choice.

There are 3 types of vaccines available.

In December 2010, a new meningococcal A conjugate vaccine was introduced nationwide in Burkina Faso, and in selected regions of Mali and Niger (the remaining regions were covered in 2011), targeting persons 1 to 29 years of age. As of June 2015, 220 million persons have been vaccinated with this vaccine in 16 countries (Benin, Burkina Faso, Cameroon, Chad, Côte d’Ivoire, Ethiopia, The Gambia, Ghana, Guinea, Mali, Mauritania, Niger, Nigeria, Senegal, Sudan, and Togo).

In addition, its thermostability allows for a use under Controlled Temperature Chain (CTC) conditions. More than 2 million persons in 4 countries have been vaccinated without ice use at the vaccination site.

It is planned that all 26 African countries considered at risk for meningitis epidemics and targeted by this vaccine introduction programme will have introduced this vaccine by 2016. High coverage of the target age group of 1–29 years is expected to eliminate meningococcal A epidemics from this continent of Africa.

Meningococcal meningitis occurs in small clusters throughout the world with seasonal variation and accounts for a variable proportion of epidemic bacterial meningitis.

The largest burden of meningococcal disease occurs in an area of sub-Saharan Africa known as the meningitis belt, which stretches from Senegal in the west to Ethiopia in the east. During the dry season between December to June, dust winds, cold nights and upper respiratory tract infections combine to damage the nasopharyngeal mucosa, increasing the risk of meningococcal disease. At the same time, transmission of N. meningitidis may be facilitated by overcrowded housing and by large population displacements at the regional level due to pilgrimages and traditional markets. This combination of factors explains the large epidemics which occur during the dry season in the meningitis belt.

Following the successful roll-out of the MenA conjugate vaccine, epidemics due to N. meningitidis serogroup A are disappearing, but other meningococcal serogroups such as NmW, NmX and NmC still cause epidemics albeit at a lower frequency and smaller size.