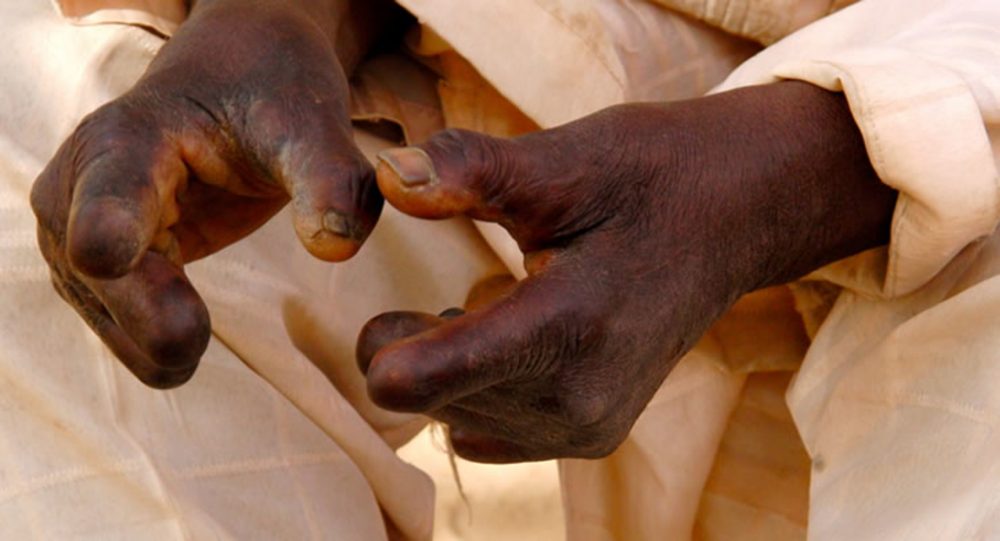 Leprosy is a chronic infectious disease caused by Mycobacterium leprae, an acid-fast, rod-shaped bacillus. The disease mainly affects the skin, the peripheral nerves, mucosa of the upper respiratory tract, and the eyes.

Leprosy is curable and treatment in the early stages can prevent disability.

Multidrug therapy (MDT) treatment has been made available through WHO free of charge to all patients worldwide since 1995. MDT provides a highly effective cure for all types of leprosy.

Elimination of leprosy as public health problem (defined as a registered prevalence of less than 1 case per 10 000 persons) was achieved globally in the year 2000. More than 16 million leprosy patients have been treated with MDT over the past 20 years.

Leprosy control has improved significantly due to leprosy case detection and awareness campaigns in several endemic countries. Integration of basic leprosy services into general health services has made diagnosis and treatment of the disease more accessible.

This strategy emphasizes the need to sustain expertise and increase the number of skilled leprosy staff, to improve the participation of affected persons in leprosy services, and to reduce visible deformities – also called grade-2 disabilities (G2D) – as well as stigma associated with the disease. The strategy also calls for renewed political commitment, enhanced coordination between partners, inclusion of persons affected by leprosy in programme management, and highlights the importance of research and improved data collection and analysis.

The number of new cases indicates the degree of continued transmission of infection. Global statistics show that 203 600 (96%) of new leprosy cases were reported from 22 priority countries.

Pockets of high endemicity still remain in some areas of many countries, including countries which report relatively few cases. Some of these areas show very high notification rates for new cases and may still witness intense transmission.

Brief history of the disease and treatment

Leprosy is an age-old disease, described in the literature of ancient civilizations. Throughout history, people afflicted have often been ostracized by their communities and families.

Although leprosy was managed differently in the past, the first breakthrough occurred in the 1940s with the development of the drug dapsone. The duration of the treatment was many years, often a lifetime, making it difficult for patients to adhere to it. In the 1960s, M. leprae started to develop resistance to dapsone, the world’s only known anti-leprosy drug at that time. In the early 1960s, rifampicin and clofazimin were discovered and subsequently added to the treatment regimen, which was later labelled as multidrug therapy (MDT).

Elimination of leprosy as a public health problem

The widespread use of MDT and the reduction in duration of treatment dramatically contributed to this reduction:

In order to reach all patients, leprosy treatment needs to be optimally integrated into general health services. Specialist services are to be retained at referral level. Moreover, political commitment needs to be sustained in all countries even after reaching elimination. Monitoring of programme implementation needs to be strengthened. Partners in leprosy elimination also need to ensure that human and financial resources continue to be available.

The age-old stigma associated with the disease remains an obstacle to self-reporting and early treatment. The image of leprosy must be changed at the global, national and local levels. A new environment, in which patients will not hesitate to come forward for diagnosis and treatment at any health facility, must be created ensuring no discrimination and promoting inclusion.

In order to reinvigorate efforts for leprosy control AHO has developed a strategy which is structured around the following 3 core goals:

Key activities of Goal I include:

Key activities of Goal II include:

Key activities of Goal III include:

Targets of the strategy

The targets of the new global strategy to be met by 2030 are:

Sustained and committed efforts by the national programmes along with continued support from national and international partners have led to a decline in the global burden of leprosy. Increased empowerment of people affected by the disease, together with their greater involvement in services and the community, will bring us closer to a world without leprosy.

The Africa Leprosy Programme is taking the lead in expanding the network for surveillance of drug resistance in leprosy, defined as a key intervention under the strategy. Improved surveillance guidelines are under preparation and integration of surveillance within AHO’s global antimicrobial resistance programme is being promoted.

Please donate and let us eliminate leprosy together